This is a text widget, which allows you to add text or HTML to your sidebar. You can use them to display text, links, images, HTML, or a combination of these. Edit them in the Widget section of the Customizer.
Posted on November 18, 2018November 18, 2018 by noandroblog

Christmas gifts on a budget

This is a completely different blog post to the more serious stuff I usually post, but I’ve had a lot of messages after posting a couple of cheap things I had found for this Christmas, so thought I’d compile a list of things I have done for this Christmas to keep things less pricey, as I am TERRIBLE for staying within budget for Christmas and massively overspend on utter shite.

These are what I have used to put homemade mango chutney into. I followed this recipe here (but skipped out Nigella seeds, because tbh, I haven’t the foggiest what a Nigella seed is) and with the ingredients, jar and labels it works out to 91p each. And I can confirm it is DELICIOUS. I bought all ingredients from Morrison’s and labels in Wilko too (you could easily make your own, but you know, laziness and that)

I have also done a fair bit of pickling. Using larger jars at £2 each in Wilko, I have made pickled onions and pickled beetroot, I did also consider doing lime pickle or jam which would make a great gifts too. Ideally things need to be pickled for around a month, so I did these all in the first few weeks of November – but you still have time.

Other ideas include homemade sloe gin!

The pickles are really easy to do, but peeling so many shallots is a little tedious.

It worked out more expensive doing the pickles as they required bigger jars and more shallots/beetroot, they worked out to £4 a jar, hence why I’ve not made as many. My partner did point out I could buy a £1 jar of pickled onions and transfer them over to the jars and nobody would know, but where’s the fun in that?

In total there are 12 jars of Chutney, 2 x pickled beetroot and 4 x pickled onions.

I bought two cans of spray paint from Wilko (but you could easily just have one, I just wanted a rose gold but Noah wanted a silver) for £4 each. We have lots of spray paint left over that I will find other uses for!

From Poundland we then bought 5 packs of 4 dinosaurs, and one pack with ten dogs. As you can probably guess, each pack cost a £1. Noah and I spray painted them outside and I then got Papa No + Ro, to drill a hole into each one – only because I hate any sort of machinery – so that we can add thread (I used embroidery thread, we have shit tonnes of it) to hang them on the tree. This was a last minute amendment, as I realised that tying it around the necks of the dinosaurs might look a little sadistic.

Each little decoration works out to 46p! Including the thread, paint and dinosaur/dog. And, I think they look pretty good.

Other things I have picked up include these for my grandma, as they are just so her. 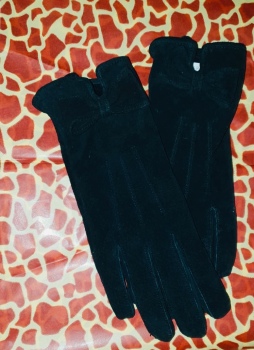 Which were £7 in Primark, they also have some pretty suave real leather gloves for £7-9, which I’m going back to get myself. I did have a pair from Urban Outfitters years ago which I lost on a night out and could never afford to replace again!

Also spotted in Wilko this week were a huge array of succulents or as my sister calls them ‘fucking aesthetic plants’. I love an instagrammable plant, as does everyone at the moment it seems and they had pretty large cacti for £10.

Of course I’m not gifting my children pickles and gloves because I doubt my five year old would be pleased, but Roman is getting a dolls house and I picked up some really cool furniture bits from Aldi.

Sadly, I’m still struggling to find dolls of other races for it – and Flying Tiger as recommended no longer sells them.

Other little things I have picked up is this gorgeous dinosaur stamp set from Mellissa & Doug via Very.com (I paid for it in full because apparently I’m not trustworthy enough for payment plans with them – thank god because I really do not need anymore debt) for £10, it is also available for the same price at John Lewis.

Just thought I’d list a few bits as I know so many of us are on a tighter budget than we’d like to be, and hopefully this will help!

One thought on “Dreaming of a tight Christmas”

Rin, 23, mother, student, human, unorganised, rambler, but ultimately a nice person with a few anecdotes from my fairly chaotic life (so far) View all posts by noandroblog